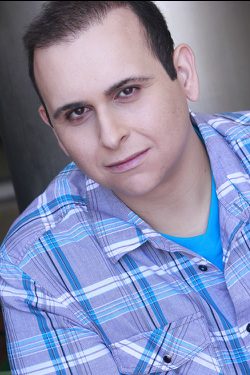 Growing up in Lawrence, Mark's dream when he was a toddler was to be a garbage man when he grew up, emptying garbage barrels and throwing them all over the place at curbs. As an only child, Mark was brought up Catholic, was very inclusional and accepting of others, and  loved entertainment and the arts, especially TV and Film. Throughout high school  at Central Catholic and also at Merrimack College,  both schools which had nothing to offer students a background in television or film, Mark took many creative writing and art classes to enhance his background in both writing and acting and worked at McDonald's as a shift manager where he hosted many kids birthday parties. Growing up, Mark was always a heavy kid and teenager, always 20 pounds or so heavier than those his age. By the time he reached high school, his weight was uncontrollable, and in college, at 6 feet tall, he reached 300 pounds at the age of 20 in 2003. A new diet and exercise plan, along with hypnosis, helped him to lose 50 pounds by the end of that summer, and an additional 100 pounds by the end of summer 2004 came off with sweating in saunas and slimming detox body wraps. It has always been a goal of Mark's to help people lose weight who have always struggled with weight gain.

On September 2nd, 2005, Mark moved to Los Angeles after he was accepted into UCLA's Professional Screenwriting Program. It was there he heard it from both of his teachers that he had a lot of energy and character when reading screenplays in class, and that he should no doubt go into acting if that's a career choice he was thinking of doing. Both of his professors told him to be an actor and to write while acting. Following the Screenwriting Program at UCLA, Mark then worked as a studio Page at CBS throughout 2007 after visiting the studio several times the previous year to see tapings of The Price Is Right. CBS was Mark's most memorable time in Los Angeles, where he greeted, processed and entertained audiences at The Price Is Right. Mark got to work amazing events at The Price Is Right, including being selected to  rehearse as a practice contestant with potential hosts such as Mario Lopez, George Hamilton and Todd Newton on several occasions, and also was selected to work Bob's final Million Dollar Spectacular, his 50 year's in television celebration episode, and  his final show. Aside from The Price Is Right, Mark also worked on other shows that taped at CBS such as Dancing With The Stars and American Idol. Also at CBS, Mark was told he had a lot of character and energy by both his managers and the staff at The Price Is Right and was told to go into acting as well by them. While working an episode of The Late Late Show with Craig Ferguson in March of 2007, Mark was asked by the director to be in a backstage comedy sketch with actress Piper Perabo and one of Craig Ferguson's production assistants on the show. In the sketch, Piper tells the assistant that his writing was not funny and Mark pats him on the shoulder telling him "It's okay buddy, you're still funny to me." The sketch, though filmed, never aired, but was the first time Mark had been asked to film anything with a line that was on a Hollywood production of any sort.

When his time as a Page ended, Mark continued writing and began his production and acting experience when he was part of the production crew on several independent features, and acted in several independent  short films. In 2009, Mark was asked to be on the series Glee as a featured character in a scene where he interacted with Matthew Morrison, and after that point, after being featured, anytime he'd work as an extra, if there were close up reaction shots, most of the times he was picked out to be featured in certain scenes in different shows he worked. Since 2009, Mark's been featured on different TV series such as Glee, Desperate Housewives,  Men of A Certain Age, Greys Anatomy, The Defenders, and Don't Trust The B-In Apartment 23.

Mark's first short film Womanizer was directed by Drew Barrymore's older brother John Barrymore and was completed in 2014. Mark's future film projects will all be directed by himself from now on, as he's now ready to take on being a producer, writer, and director of his own works after years of working on both Hollywood and indie sets as an assistant and actor.

Since early 2010, Mark has taken many acting classes. He has been professionally trained in Hollywood as a Screenwriter by Television Screenwriters Paul Chitlik and Fred Rubin, and as an Actor by Actors John Blyth Barrymore, Amy Lyndon, and Judy Kain.

In July of 2014,  Mark became a page again when he was offered a position at Audiences Unlimited after several years of checking in to see if they had any vacancies and were accepting new page submissions. There he worked as a page at many television series that filmed in front of live studio audiences and worked at a good number of them including  Fuller House, 2 Broke Girls, Mom, Girl Meets World, The Conners, The Ranch, All That, and America's Funniest Home Videos. When Mark worked at Fuller House, he created trivia based on the original series Full House, and did the same thing when he worked at Girl Meets World with trivia from Boy Meets World and trivia from Roseanne when he worked at The Conners. This got the audience to have fun out in line and to be familiar with the original series of the reboots they were attending.

Mark has learned a lot about film making, television production, acting, and has worked on many sets in many different studios in the Los Angeles area including CBS, ABC Prospect, Warner Bros. CBS Radford, Paramount, FOX, Sony, Universal, Los Angeles Center Studios and Manhattan Beach Studios, and has learned a lot by being an extra, featured extra, and audience page while working many shows all over town.

On July 3, 2019, Mark decided that after all the years of pursuing his dreams and goals in Los Angeles, he felt there was so much more he could have been given, and watched as others who bad-mouthed and then brown nosed people in the business to help them get referred to gigs. Mark wasn't like that one bit. He went about his career and journey the honest way, and everyone who followed him over the years knew that. He's never brown nosed casting or anyone in entertainment to get more work, he worked hard submitting, studying, and showcasing his talents online for years. He believed that enough was enough, and he packed up and moved home to Methuen, Mass. Mark realized that he could write, produce and act anywhere. He didn't have to be in Los Angeles just for that. Mark will never give up on his entertainment goals and whenever he wants to, will write, produce and act from anywhere he lives in life.